Sales Customer services
Given the choice, manufacturing professionals would always choose faster – a faster processor, device, or machine – as long as crucial factors like price and accuracy remained constant. Equipment manufacturers know this and competitive pressures often result in the delivery of newer products with higher levels of performance. This is as true in metrology products as in any other field. However, speed includes more than just fast collection devices when viewed from the perspective of the user.

Faster measuring devices are one thing, integrating them together into a capable system is another.

In many cases, the driver for an in-line CMM system paradoxically, is to reduce cost to deliver more accuracy. For a manufacturing process that may be less repeatable in what it produces, a highly capable CMM deserves another look. “You need to compare the cost of a relatively inexpensive CMM to what may be an expensive upgrade in machining capability. If your machining process is in-control enough to be able to make adjustments based on metrology information alone- and avoid scrap -you can typically save money,” said Gudauskas. Such a process can even enable nano-scale machining, where today’s machining capabilities is at the very edge of what is possible. One of his customers used a Leitz Infinity CMM with measuring capability around 0.4 microns, to produce nano-scale parts.

Matching the needs of the process with technology for the optimum speed is important, according to Gudauskas. “You can overload people with data sometimes.” He also emphasizes that delivering speed requires a speedy CMM - with high acceleration / deceleration rates - to move the probe or sensor no matter how much or little data is needed. For instance, the ultra high-end Leitz PMM-F 700 is capable of 650 mm/sec speed with an acceleration of 3000 mm/sec-squared, while the more mass-market Brown & Sharpe Global has speed of 866 mm/s and acceleration of 4330mm/sec-squared.

“CMMs are capable of speed, especially when combined with automation, but there are different levels on that value chain.” Some processes only need to put the first, middle, and last production piece on a CMM if they have a highly capable machining process. On the other end of the spectrum are highly automated CMM systems for processes that require 100% inspection. Industrial robots loading and unloading a CMM are useful for small parts. The next step in automation (and a requirement for larger parts) is a pallet loading system fed by a turnstile. To round out the integration system, he points to the need for flexible, easy to use software for off-line programming of measurement programs that can also “speak” to automation equipment, such as robots, such as PC-DMIS.

One example of a system was delivered to Fulton Industries Inc. (South Bend Indiana) for measuring differential cases. The system calculates the proper shims for optimal performance of a differential assembly used in a 4x4 off-road heavy machinery vehicle. Using two Global Advantage CMM’s with pick and place Fanuc R2000i robots for loading and unloading of parts, the system measures critical features on the part. It stores the serialized information along with the part. A label is printed containing the serial number of the part, the shim sizes needed to assemble the differential, the machine tool and the cube on the machine where the part was processed. ”When the part is assembled, the proper size shims are automatically chosen by scanning the label printed by the CMM system. A single touch trigger probe was used. “Many automated systems use one probing type since they are dedicated to a certain process,” said Gudauskas.
From his perspective as an integrator, he notes that touch probes and scanning analogue probes continue to dominate most installations. Laser line scanners and video probes are also coming along as additional sensor choices for certain types of parts and inspection tasks. 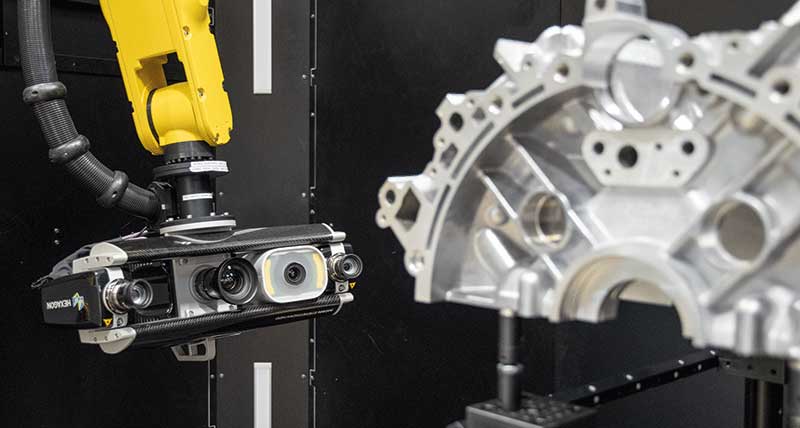 Smart manufacturing relies on the ability to capture and use data within your processes. Hexagon’s industrial robotics and automation solutions support fully...