How to build a racing car from just some rattling boxes 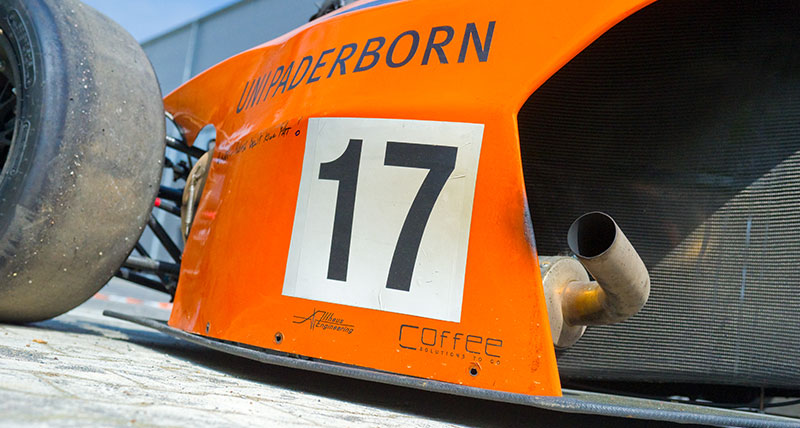 The UPBracing Team of Paderborn University has been a regular contender on the Formula Student circuit since 2006. The student racing team is therefore one of the more experienced in the international constructors’ championship. But to compete with the best, some very special technology is needed.

Building a racing car is a bit like Lego, but at a much higher level. Everything is a bit more complex and a bit bigger, above all the boys who play with it.


And yet - the similarity to the legendary construction set cannot be denied. Anybody who ever received Lego as a present remembers the promising rattle when you shook the box. The mixture of excited anticipation and quiet self-doubt that came along with it.

Can I really build that? Will I be up to it? Christoph Wälter is 1st Chairman of UPBracing Team e.V., the racing team of Paderborn University. The team is made up of students from all faculties of the university, and they work together to design and construct a single-seater racing car for the Formula Student competition.

Formula Student has its origins in an American university competition that was founded by the SAE (Society of Automotive Engineers) in 1981. In 1998 the idea migrated across the Atlantic to Great Britain and in the years that followed, more and more international race courses staged the constructors’ competition, one of them the Hockenheimring.

From 2006, the Verein Deutscher Ingenieure (VDI) has been in charge of Formula Student Germany and this has opened the door to the race track for many German students.

The objective of the Formula Student project is to gain experience in car design and construction, and the commercial aspects of automotive engineering. To this end, the participants form a virtual production company that is focused on the development and construction of a formula racing car with the aim of producing a fully functional prototype.

All teams come together once or twice a year at legendary race courses throughout the world to race against each other. However, in Formula Student it is not necessarily the fastest car that wins but the team with the best overall package of construction, racing performance, financial planning and promotional arguments. The UPBracing Team of Paderborn University is one of the most experienced Formula Student racing teams in Germany. They produced their first racing car back in 2006, when racing started in Germany and are now successfully racing hard into their seventh season. The team includes over 140 former and about 40 active members - and each one of them is familiar with the problem of the rattling boxes.

It starts with rattling boxes

Yes, those rattling boxes” muses Christoph Wälter and explains: “Of course, as a student team we don’t receive our vehicle components fully assembled as professional racing teams would. We are grateful when companies let us have some material and parts. It doesn’t matter if they come unsorted and loosely packed. The main thing is that we get what we need.“

Prime among these are the metal parts for the lattice tube frame of the planned competition vehicle. This is practically the race car’s skeleton, a hybrid chassis consisting of a steel lattice tube rear frame with a CRP monocoque driver’s cell and a CRP crashbox.

“We had the steel tubes manufactured to our exact CAD data. They were delivered as individual parts“, explains Christoph Wälter. So the content of the rattling box had to be welded together with millimetre precision to make up the lattice tube frame. Not an easy task – and not manageable without help.

While perhaps help with the Lego set was at hand in the form of dad or big brother in order to overcome such hurdles, this job required more than that. Not just a helping hand but an entire arm, in the literal sense of the word. It came from a company that has now been supporting the UPBracing Team for several years: Hexagon Metrology

Hexagon Metrology is the world’s leading supplier of products and services in industrial metrology. Main application areas include the automotive industry, aviation, energy and biomedical engineering, and so it was only natural that they had the perfect tool to support the UPBracing Team: the ROMER Absolute Arm.

With a total of 25 model versions, available in six or seven axis configurations, the ROMER Absolute Arm supplied by Hexagon Metrology has a measurement range of up to 4.5 metres. They work with a volumetric accuracy of up to 0.023 millimetres and a reproducibility of individual points of up to 0.016 millimetres.

The helping arm of metrology

“Of course, we don’t need quite that range for the UPB racing Team“, says Robert Neufeld, in charge of sales at Hexagon Metrology and metrology adviser to the Paderborn student team. “We have supplied the team with a ROMER Absolute Arm with a measurement range of 2.5 m and a single point reproducibility of 0.02 millimetres.“ 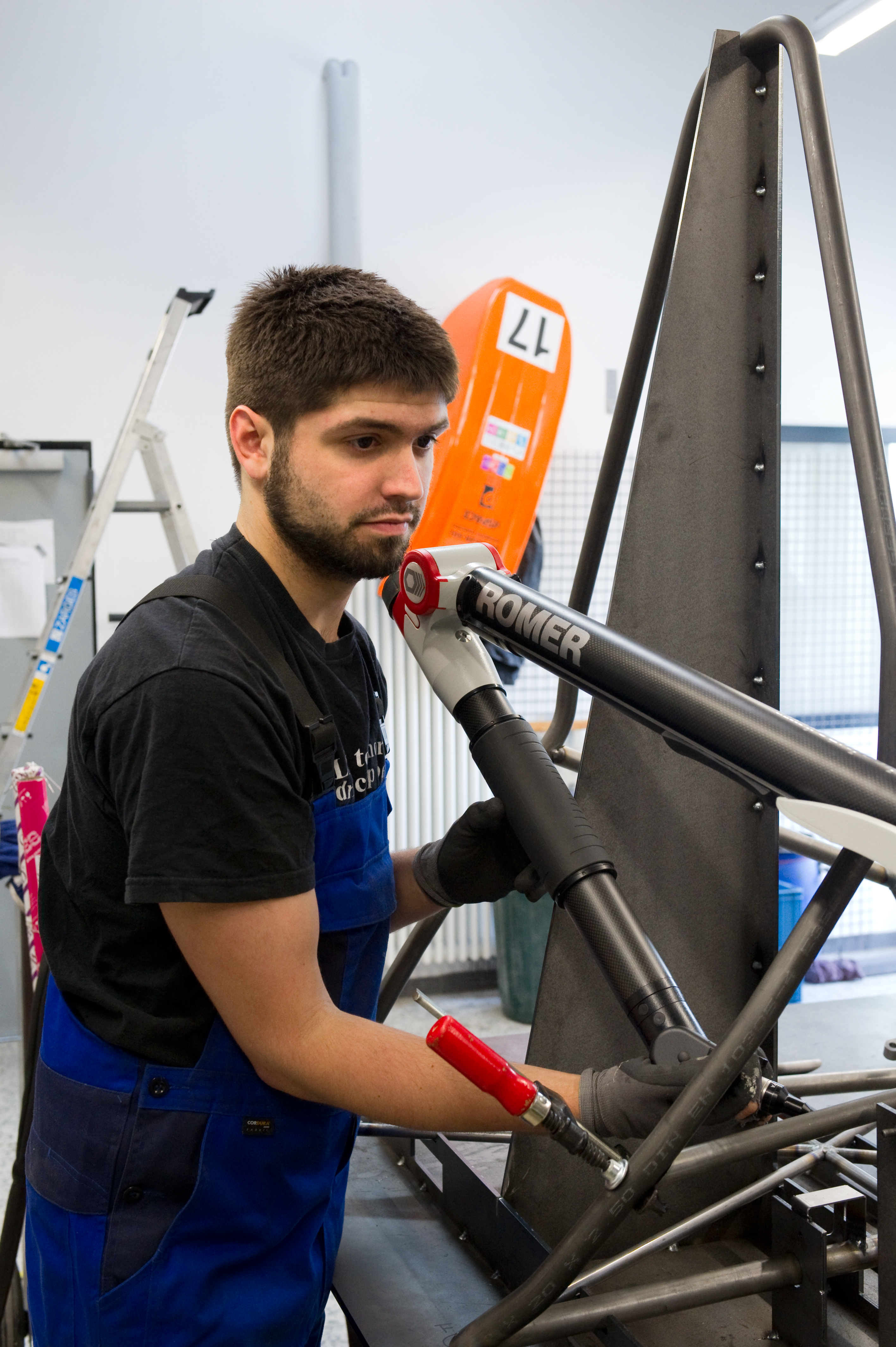 The ROMER Absolute Arm is currently used by the Paderborn racing team to accurately check the welded lattice tube frame elements. “This is not at all a trivial task”, comments the team boss and explains: “Each vehicle component has a precise position within the frame, which is defined to the millimetre. Even a minute deviation in the frame structure compared to the CAD data would have a fatal effect on function and safety. Without the ROMER Absolute Arm as a measuring tool we could never achieve the required precision, we would still be faced with a load of rattling boxes.“

It is fascinating to see how relaxed the team goes about its business in spite of their need for high-end precision.

With a surprisingly low weight of just 8.0 kilograms the ROMER Absolute Arm is perfect for the team’s needs: its light weight is ideal for manoevering around the car, and measuring even in difficult to reach areas. This lightness is the result of the carbon fibre structure of the arm’s internal and external tubes. This is also the reason why the ROMER Absolute Arm does not require a temperature compensation device - unlike other more traditional measurement arms that are still made out of aluminium.

The UPBracing Team has established a special forum that is dedicated to the application of the ROMER Absolute Arm. Everybody who uses it can enter his or her experiences, and add any tips or tricks.

The young constructors are clearly excited about the absolute encoders integrated into the arm’s movement axes, which assign an absolute value to the position of each joint. This technology makes encoder referencing and warm-up time unnecessary - the measuring arm is ready for operation immediately after it is switched on, even in a confined space. “You don’t have to mess about, you just do it”, is Christoph Wälter’s comment on this feature which is unique to the industry.

Quick set-up, quick measurement, quick result. The ROMER Absolute Arm’s features make it perfect for racing. Automatic probe recognition means that measurement probes can be swapped on the fly, without any need for recalibration. The team in Paderborn makes special use of the arm’s wi fi connection and the battery operation. “The speed of this and its operating time are way better than those of my smartphone”, smiles the team boss.

It will probably take another month until a complete racer is built from all of the parts in those rattling boxes before participating in its first race at Silverstone. From its transverse mounted Suzuki GSR 600 in-line four cylinder engine, the university racer will produce about 92 hp, accelerating to a top speed of about 120 km/h. With power like that, and such accurate construction, there is no doubt that the car, which has been named PX213, will make a strong impression in the 2013 season.

There is no Formula Student team – at least in Germany – that is better equipped to build a racing car from a set of rattling boxes. And certainly no other team that can rely on such easy accuracy.