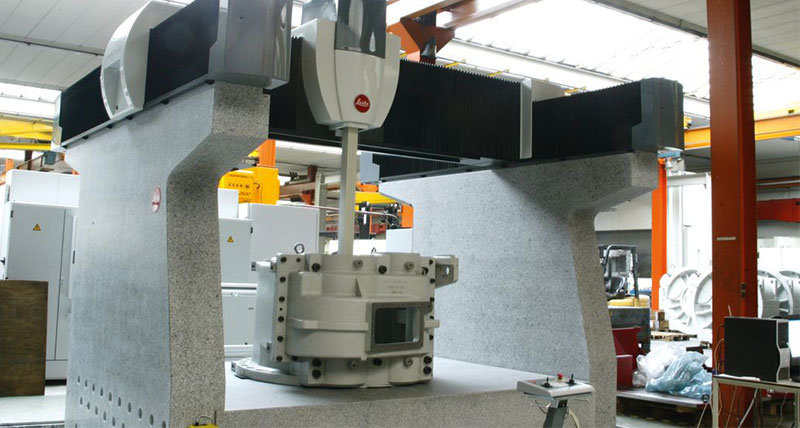 Only fifty microns is the tolerance on the axle bores of a 4-ton transmission case used in a wind turbine. The Belgian manufacturer TVL achieves reproducible measurement of the complex and nearly inaccessible geometry in about 30 minutes on a Leitz precision coordinate measuring machine made by Hexagon Manufacturing Intelligence, Wetzlar.

TVL Toeleveringsbedrijf van Landuyt NV has been finishing transmission housings for wind turbines in Wetteren, Belgium, for several years. When they started, around 100 housings were completed within the year 2000; today they have reached 900 housings annually.

TVL produces transmission housings up to 2500 mm length with bores having diameters of up to 2000 mm. As an example, the tolerance for a 650 mm bore is only ± 25 μm and must be measured verifiably on every housing. This means that drilling is toleranced at a mere 0.008 % of nominal size. Managing director Geert Van Landuyt
says: “We couldn’t measure the big transmission housings in-house. So we were working together with a service provider with the necessary equipment in Germany.” But as production quantities grew, transportation to the service provider became a costly proposition. “We have decided in favor of our own coordinate measuring machine.”

Each of the 4-ton transmission housings has been measured on a Leitz PMM-F high precision cmm, manufactured by Hexagon Manufacturing Intelligence GmbH, Wetzlar since November 2005.

The housings are measured in a room with the same temperature conditions as on the shop floor. This eliminates the usual waiting times associated with parts adjusting to measuring temperature. At the moment, TVL operates in two shifts, and in certain areas three, measuring around-theclock “just in time” close to the production.

The size of the cmm is considerable: with a length of 4.5 meters, width of 4.36 meters, and a height of 5.09 meters, it offers a measuring volume of 3000 x 2000 x 1600 mm. Weighing in at 28 tons, a special foundation was poured to provide a stable, vibration free base. The U-formed body made of gray granite doesn’t absorb as much humidity as black granite which increases the overall stability of the measurement results.

The transmission housings are transported with a crane to the PMM-F. After automated alignment of the part and reading of the part’s temperature by the cmm the measuring process can start. The actual temperature of the transmission housing is applied to the measuring programs points and evaluations, thus ensuring the same
measured points are taken at arbitrary temperatures at any time. The entire measurement takes only about 30 minutes and includes some points in nearly inaccessible areas of the housing.

Van Landuyt approached three select manufacturers with the task of measuring the axle and bearing bushings in a transmission case for parallelism, straightness and precision of the diameter.

The results turned out very differently. Only the Leitz results compared very well with the known values, offering high reproducibility and a proven measurement uncertainty of 2.5 μm. Precision, speed, the personal support and not least the price made the Leitz coordinate cmm the ideal measuring machine for TVL.

The measurement of the large axle openings of the transmission housing were determined by 20 single measured points each. Impressive were the shor measurement times afforded by the precise positioning ways and the increased acceleration of the ram while probing. Geert Van Landuyt and the metrologists at TVL enjoy a high level of satisfaction with the performance spectrum of the Leitz coordinate measuring machine.

Such a cmm doesn’t get built overnight. Through direct consultation with the user many questions need to be addressed; how precise should the measurement be, which measuring points should be scanned and which special issues shall be taken into account? This close cooperation between manufacturer and user led to another special
feature: the dynamic tool changer rack.

As a rule, complex inspections of large parts require several styli changes during the measuring process, since any one stylus can’t reach all measuring points.

However, a conventional tool rack at the end of the measuring volume restricts the range of the styli system enormously especially with particularly long styli configurations. Too much active measuring range is lost by a rigid tool rack.

The newly developed dynamic tool rack swings itself out of the measuring volume after a styli change is completed. The complete area is then available for the ensuing styli positions. The exchanged stylus immediately starts with the measuring process.

Hexagon Manufacturing Intelligence assembles each Leitz cmm in its production hall, adjusts it, and tests its measuring results and reproducibility. Each CMM is delivered completely pre-assembled, with Y-Axis dismounted. The YAxis is mounted again on site.

After final assembly, the geometric errors of the cmm are corrected again using a laser measuring device and test measurements are carried out to confirm compliance with the stated specification. Thanks to the highly linear force/ deflection characteristic of the Leitz probe, an extremely reproducible probing result ensues.

When it comes to high speed scanning, the Leitz PMM-F demonstrates its abilities. In addition, an integrated collision protection prevents damaging the ram.

The machine-independent 3D measurement software QUINDOS now runs on all TVL equipment to provide a common user environment on all devices. The only difference lies in the specific hardware in use at TVL such as a switching or measuring probes.

Broader advantages of universally applying the software are the interchange- ability of the measuring programs between the different gauges as well as use of common statistical files or reports. This not only minimizes the costs for the software maintenance at TVL for their special measuring programs but also reduces the costs for the further training of their staff since the same releases will be installed on all equipment in future. 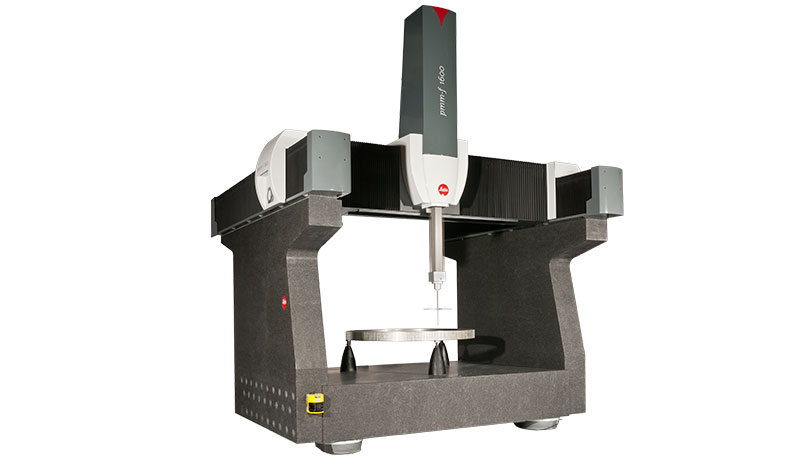