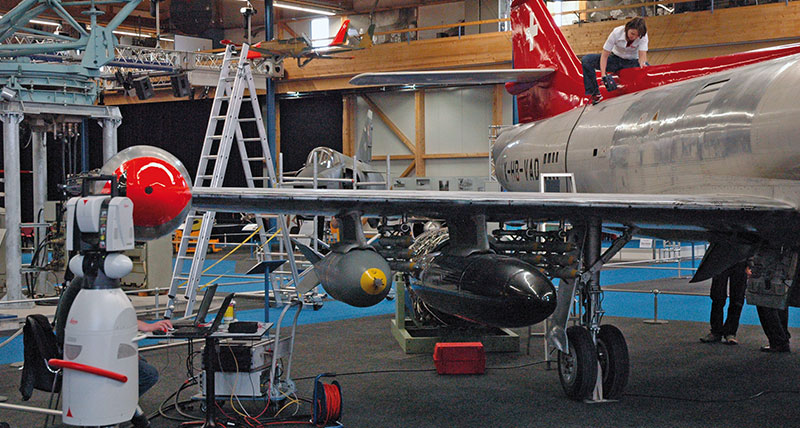 More often than not, industrial metrology involves performing measurements on no-thrills, mundane, dull-as-dish-water measurement objects. Inspecting them is usually as exciting as watching grass grow. But every now and then one comes across a task that is as different as chalk and cheese. Like digitizing an entire fighter bomber jet, for example. Enter the P-16. 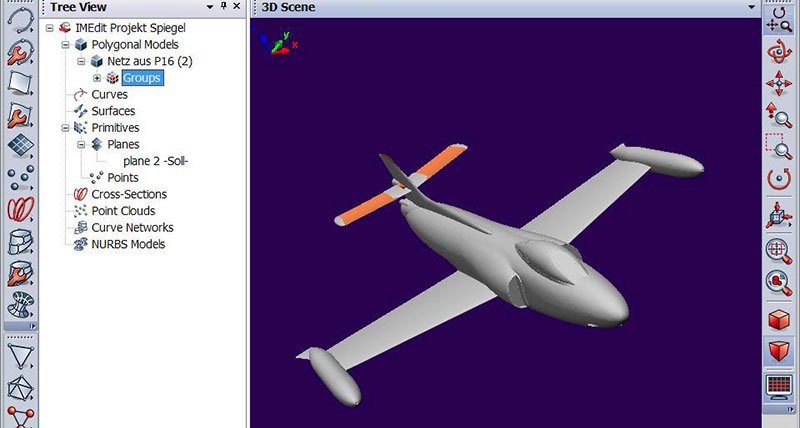 Its story starts in 1948. Anxiously following the then-emerging Cold War world order and diligently guarding the country’s armed neutrality – a policy forged while being surrounded by war-torn countries during WWII while itself escaping armed conflict entirely – the High Command of the Swiss Air Force was interested in developing a fight bomber whose flight and payload characteristics were specially tailored to suit the particulars of the complex Swiss topography. The demanding requirements included a near-supersonic top speed, excellent maneuverability and the ability to land and take off on extremely short runways typical of the alpine regions.

The first prototype had its maiden flight in 1955. The plane featured the thenrevolutionary wing design with a thin profile and a unique combination of trailing edge flaps, droopable. ailerons and Krüger-type leading edge flaps, which increase the lift significantly. As a result, the P-16 could start on runways under 500 meters in length, and landings required a mere 300 meters. The Swiss Air Force ordered 100 P-16s. However, the entire project was doomed when two catastrophic accidents related to minor mechanical problems lead the Swiss government to halt the project and cancel the entire order. Luckily, the plane’s revolutionary wing design was reincarnated in the first-ever business jets made by Lear Jet. These pioneering business jets incorporated many of the P-16 design features, which were at the time considered too risky. Truth be told, the plane was simply 10 to 15 years ahead of its time. Sadly, none of the design drawings have survived to the present, and only one actual P-16 plane remains, exhibitted at the Dübendorf Aviation Museum near Zürich.

Earlier this year, Marc Immer, a mechanical engineering student at ETH in Zürich, wanted to digitize this historic Swiss fighter bomber and analyze its aerodynamic properties by testing its scaled model in a wind tunnel. After evaluating what scanning solutions were available on the market, he concluded that the only system that was up to the challenge was the Leica T-Scan from Leica Geosystems. Happy to get involved in a scientific project involving such a gorgeous piece of Swiss history, Leica Geosystems performed the pro bono work. 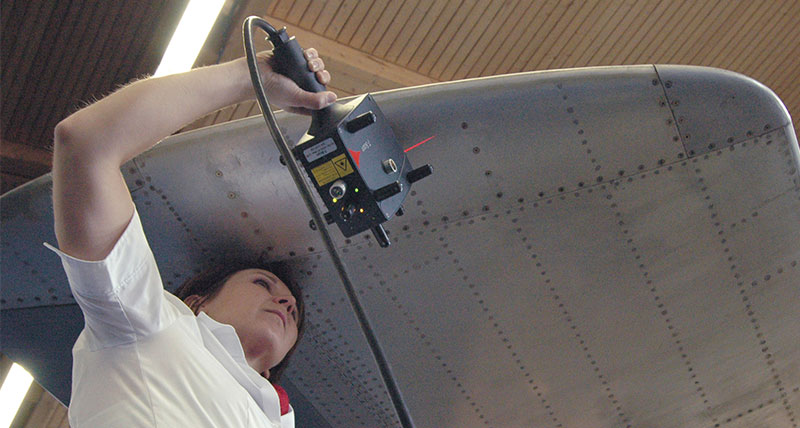 Other solutions evaluated for the scanning job either lacked the required accuracy or worked in a measurement volume that was too small for the size of the P-16 jet. At more than 14 meters long, 11 meters wingspan and 4 meters height, the plane has a large surface area, with the wings alone having nearly 30 square meters. Whatever scanning equipment was chosen had to be able to effectively cope with such vast surfaces yet deliver the desired accuracies.

The system used for the P-16 scan is a brand-new Leica Absolute Tracker AT901-LR mated to a Leica T-Scan handheld laser scanner. A laser tracker is a portable coordinate measurement machine that relies on a laser beam to accurately measure and inspect in a large spherical volume. A laser tracker can gather information in 3 different ways: by following a small mirrored sphere, by tracking a wireless, armless contact probe or by tracking a hand-held scanner, as is the case with the P-16 project.

The Leica T-Scan is coupled to the Absolute Laser Tracker by means of a digital camera system (Leica T-Cam) that operates with visible light and infrared (IR) radiation, with an optical vario zoom and a motor for vertical, angular movement. Mounted on top of the laser tracker, the camera system continuously follows the Leica T-Scan and captures the images of the IR LEDs located on it. The camera’s incremental angle encoder is used to provide the vertical angular movement of the camera itself based on tracker guidance angles. The Digital Signal Processor (DSP), located within the Leica T-Cam, makes all the calculations and image processing tasks, while the zoom lens group is completely sealed in the body of the Leica T-Cam. This design allows stable and repeatable measurements.

A reflector integrated in the Leica T-Scan, together with a set of ten IR LEDs, represents the measurement targets of the system. Six measurement parameters describe the target device in relation to the tracker system completely. These are three position parameters (x, y and z) and three orientation parameters (pitch, yaw and roll). Together, they comprise the Six Degrees of Freedom (6DoF) principle. These parameters are determined by the laser tracker (position) and the Leica T-Cam (orientation).

The IR LEDs are given unique IDs, which identify the LED and its position on the target device. After identification of the LEDs in the Leica T-Cam, the LEDs are set to measurement modus (constant illumination). A minimum of four LEDs must be continuously visible by the Leica T-Cam to allow a 6DoF calculation. Best results are achieved when the visible LEDs are spatially distributed. To avoid uncertainties and bad measurement conditions, the LEDs are divided into four different groups and an accurate measurement is only possible if the Leica T-Cam can lock onto at least one LED from each LED group. 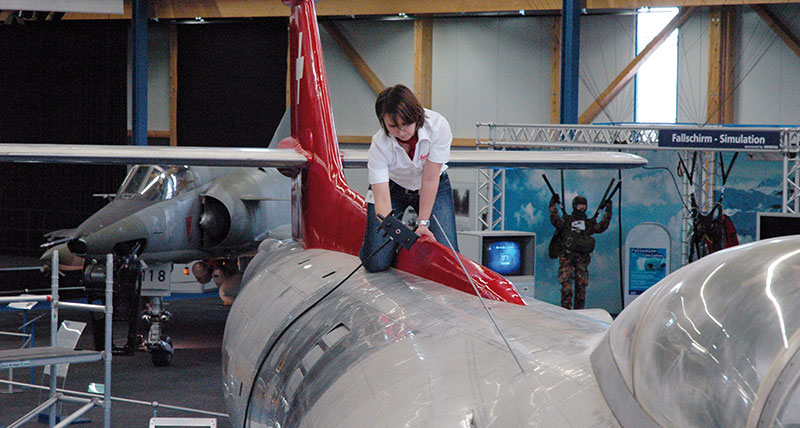 The optical system is fine-tuned for infrared rays with a 880 nm wavelength, emitted by the IR LEDs. The built-in insensitivity to radiation outside the infrared zone enables high accuracy and repeatability of the LED images on the CMOS chip. That way, regardless of whether the measurements are done in direct sunlight or in an industrial setting with sharply changing environmental light, the Leica T-Cam is impervious to varying environmental light conditions.

Over the course of two working days, a total of 40 million points were collected during the P-16 scan. To create a 3D model usable for CAD (Computer Aided Design) applications, the data obtained with the Leica T-Scan was imported into PolyWorks, the standard software suite for point-cloud processing used with the Leica T-Scan. That way, a polygonal model of the P-16 aircraft was created. With advanced algorithms, PolyWorks averaged all data points and merged them together to create an accurate meshed model. Then, the model was cleaned and edited using PolyWorks editing tools to produce a usable and accurate digital representation of the historic aircraft. The data processing and optimization was done by an application specialist from Duwe-3d AG. The company Duwe-3d AG in Lindau, Germany is european partner of InnovMetric Software Inc.

Marc Immer: “My intention is to recalculate the performance data of the aircraft. That way, calculations of flight performance characteristics such as ascent and descent rates, stall speeds as well as the plane’s aerodynamic behavior with the lowered and retracted flaps will deliver the kind of information that has never existed for this aircraft due to the sudden termination of the project and the near complete absence of documentation relating to the development and the consequent flight tests. Getting involved in the P-16 project has made this research project extremely worthwhile, giving me valuable real-world experience with using the most advanced industrial metrology equipment available on the market.”