The history and evolution of coordinate measuring machine CMM controllers

The evolution of Hexagon controllers 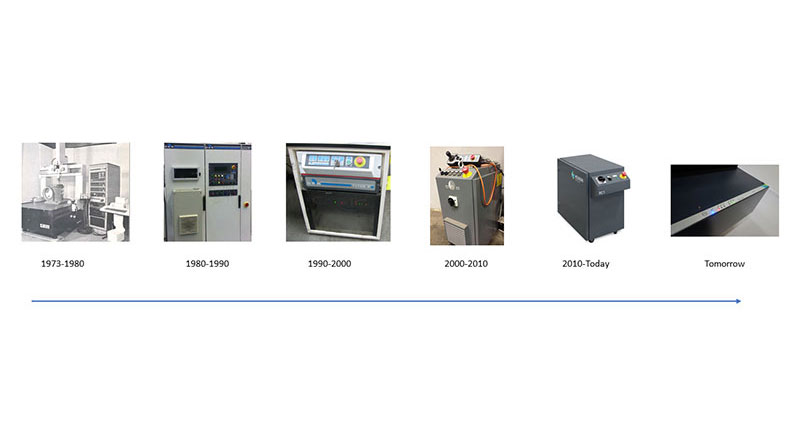 Computer numerical control (CNC) is a method for automating the control of machine tools by using dedicated hardware, software and microcomputers. It is commonly used in manufacturing for machining parts and measuring them, through the execution of a part program containing the instructions and parameters the machine tool or probe will follow, such as the feed rate and the axes speed and position.

An encoder system on each axis gives feedback to the controller with regard to the position while the motor drive receives the command from the controller to guide the movements with high precision and to the desired coordinates. In simple terms, we say the axes of a machine are ‘controlled’. Controllers record the coordinates of a point from the probing system in real-time, with data moving to and from the machine.

While the first machinery using CNC technology entered the market in the early 1950s with milling machines, lathes and other production machines, the stationary 3-axis CMMs that appeared in the industry about 10 years later remained in use as manual systems with rigid probes, no software and with a limited spread in the industry.

It was in 1973 that the first automated CMM presented by DEA disrupted the market. Thanks to a sophisticated and expensive controller linked to industrial calculators, the CMM could now run measuring operations automatically by programming and transmitting instruction codes to computers via paper tapes. At the same time, rigid probes from the early days of CMMs were replaced by electromechanical touch trigger probes, as use of the motorised CMM was incompatible with the rigid probes. This development allowed the controller to move the axes to the required position and freeze the coordinates at the opening of the touch trigger contact. This enabled very precise approach and retract trajectories to and from the part, avoiding the risks of damaging it and ensuring unprecedented reliable measuring reliability.

The last 25 years of this evolution has moved the focus from these primordial controllers to advanced and intelligent metrology software with smart interfaces that allow users to import and manage complex CAD files, create and execute part programs and produce advanced measuring reports, with an efficiency that was unimaginable years before. With incredible improvements in the control algorithms, controllers have a significant impact on the precision, reliability, and consistency of a measuring program.

Today controllers are sharply reducing in both costs and dimensions, while developers continue to expand their data processing capacity, features and capabilities. Combined with new advanced technology sensors – such as high-frequency lasers, non-contact scanners and continuous scanning probes ¬– they can provide huge volumes of data in a few seconds.

Thanks to retrofitting, these advancements can be extended to a large proportion of controllers installed in the last 25 years, allowing users to protect their capital investments and update machines to the newest technology and reliability standards.

While there has been tremendous change throughout the history of CNC technology, there are a few cornerstones that have remained unchanged. Automated motion control manufacturing machines, from the primary concepts of the early days to the highly advanced systems of today, still require three main components: command functions, a drive and motion system, and a feedback system.

Still, the controller’s evolution does not end here; the system’s microcomputer and processor components are subject to faster obsolescence than before, so continuous innovation of hardware is required. And the demands posed by Industry 4.0 and the Internet of Things (IoT) will surely drive even greater innovations, adding another interesting chapter to the evolving history of CNC.